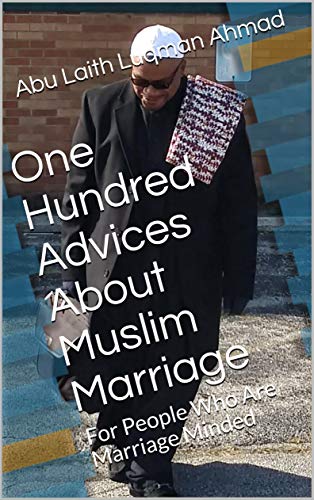 If you are looking for the perfect Muslim man who is the embodiment of prophetic character and constitution in every possible way, then you will never find that person, and if you did, it is unlikely that you will be the perfect paragon of virtue to match him. I mean, anything is possible, but being human and all, it is likely that you, as well as your spouse or potential  spouse will have human qualities. However, there is such a thing as an ideal spouse that fits and compliments you.

Every Muslim woman who seeks marriage in Islam should be aware that you are seeking a person to not only be a husband, friend, lover, life-partner, and all those good things; but you are seeking someone to be the imam of your home and family. Of course you want him to be a kind, generous, patient, good-natured, healthy, attractive (to you), and a god –fearing , virtuous husband who is reasonable. Nevertheless,  as a woman, you need to be clear about what you really want and seek in a marriage. The imam part is important because any man who is worth his salt as a Muslim man, realizes that in addition to being other things, he must be the Imam of his home. That is not his choice, that is an obligation, a contract between him and his Lord.

Many sisters say they want one thing but when they get it, it turns out that it’s not what they really want. Don’t say you want a strong man, and then resent his strength when he tries to lead, or his firmness in some things, or say you want a knowledgeable man, and want him to disregard his knowledge and follow your or someone else’s whim, and don’t say you want a god-fearing, pious man, and then oppose him when he wants to direct his family to piety.

If a woman wants a man who has these good and godly qualities then she should seek that type of man, and not be overtaken by his looks, his swagger, his car, his walk or his talk.  If a woman seeks a husband who does not have the qualities of a good man, then she will likely get a joker. The first thing to check about a potential Muslim spouse is his salat, and if you check his, make sure that you check yours too. Keep in mind that all the beautiful qualities that you want in a husband,  you should make sure that comparable qualities exist in your own self.  Realistically people are human, are fallible, and no one is perfect, and you are much more likely to find a husband and a lasting marriage by seeking a good man, than a perfect man.

If you are a Muslim woman who does not particularly want to be married to a religious man, or a man who prays, or enjoins you to pray, pays zakaat, fasts and enjoins you to fast, and observes a healthy (non-extremist) Islamic lifestyle, then that is your choice, and you should be honest with yourself about that. He can still be a decent person and not be that much into practicing his Islam.

This is not about blaming this or that person for how they want to live and what they consider important. Islam is a path, not a destination and people struggle with all aspects of their faith from time to time, that is life.

Nevertheless,  lets keep it real sisters, if you are not really trying to live the Islamic lifestyle as a wife and a woman, then don’t waste the time of a brother who is looking for that type of lifestyle.  You need to be clear with yourself about that, and he needs to be clear with you about that. Likewise, if you as a Muslim woman, know that you want to life a serious and sober Islamic lifestyle, and raise your children accordingly, then don’t be beguiled by a brother who is handsome, talks a good game, drives a nice car, wears designer clothes, but lacks the substance that you are seeking. A woman can help a man evolve and grow, and vice versa, but people can’t change people.

Every woman should have a general idea about how she wants to get pattern her home life, what she’s willing, or not willing to do, and how where she is in her deen, and Allah is the best judge. However, for the new and not so new Muslim woman who wishes to be married and live an Islamic lifestyle here in the United States to the best of their ability, it is important to seek and marry the kind of men who can and will support that type of life.  With that in mind, here are some things that you should look for in a real Muslim man. These qualities will not make a perfect man, for such a thing is a fantasy. However, if a brother has these qualities, and you have problems in your marriage as many of us do, a man with the qualities mentioned below, gives you a lot to work with. Just keep in mind, your marriage is not entirely built upon the man and what he does and who he is, it is equally dependent on who, who you are and what you do. Marriage is a two-way street.  So each trait that you look for in a husband, you must ask yourself, do you have similar complimentary traits? Similarly, each question you ask about his past and upbringing, be prepared to answer similar questions about yourself. Wallahul Musta’aan.

These are just a few things that our women must consider in choosing a mate. If you are already married, then you should encourage your husband to adopt some of these traits and don’t make excuses for him or just be another mommy for him. Sisters, there is no such thing as a perfect marriage, and there are no perfect men, just like there are no perfect women. However there is such a thing as good and bad qualities in a man, as well as a woman. Try to choose someone in whom the good qualities outweigh the bad. And Allah knows best. Wa bihi tawfeeq. Imam Abu Laith Luqman Ahmad.

Shaykh Abu Laith Luqman Ahmad, a Philadelphia native, is a writer, a researcher and Imam at the Toledo Masjid al-Islam in Ohio. He is a former executive committee member of the North America Imams Federation (NAIF), and the author of the book, “Double Edged Slavery“, a critical and authoritative look at the condition of African American and convert Muslims in the United States, and the book: “The Devil’s Deception of the Modern Day Salafi Sect “, a critical look at the ideological underpinning of modern Salafist extremism, and the author of the new e-book, “Killing Marriage in Black Muslim America“, a brief look at the marriage dilemma among Black American Muslims and converts to Islam.

He blogs at imamluqman.wordpress.com, and can be reached at imamabulaith@yahoo.com.

[i] Related by Bukhaari